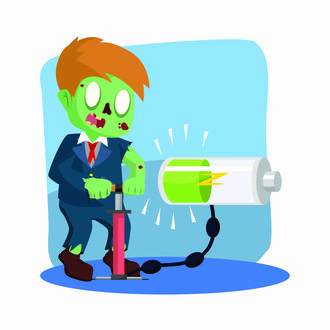 With Halloween right around the corner, it can conjure forth scary images of monsters, ghosts, vampires and of course zombies! To me zombies can be one of the most terrifying things and not only just at this time of year. So what’s their story and why do I find them so scary?

Well to start, let me tell you a bit about the origin of zombies. They appear to date back to the Ancient Greeks where they may have been the first civilization terrorized by a fear of the undead. Archaeologists have unearthed many ancient graves which contained skeletons pinned down by rocks and other heavy objects, assumedly to prevent the dead creatures from reanimating.

They have become more and more popular over the years being featured in movies, tv series’, books, blogs, podcasts and so on. If the tale of these creatures is so popular, is there some truth to it? Can Zombie’s be real? We think they might be. Uncover the Zombie Battery.

A zombie, according to pop culture and folklore, is usually known as a reawakened entity, compelled to come back to life suddenly and unsuspectingly, and rise up to live another day, even for no useful purpose. Zombies are usually portrayed as strong but robotic beings who typically don’t speak (although some may grunt a little). Zombie batteries is the term coined for a parallel terror. Just like with in the case of real zombies, batteries can be improperly tossed out when they appear to have lost their usefulness and then sometimes come back to life with dangerous affects.

Zombie batteries are an explosive problem, causing fires at waste and recycling sites. These explosions occur when batteries are in contact with water ingress, excessive heat or are crushed or punctured during waste processing. Nickel-metal hydride batteries and lithium-ion batteries (which power cell phones, tablets and toothbrushes) and can be extremely volatile if damaged. CCTV footage taken at several recycling centers have shown explosions sending flames and debris shooting across sorting areas. If the discarded battery is sitting amongst dry materials like paper, they will act as kindling and help quickly spread the fire.

Fires caused by discarded batteries can pose dangerous risks to waste disposal workers, threaten damage to the environment and equipment, and can disrupt waste services. As more products become battery-operated, fires in waste and recycling sites will only worsen unless users are responsible with their disposal. Industry experts are urging people across the world help prevent this problem.

But do not fear as there is hope!  According to Call2Recycle Canada, Inc. (Canada's National Consumer Battery Collection and Recycling Program) “4.1 million kilograms of household batteries were recycled in 2020… Canadians continuing to recycle their batteries safely contributed to the largest amount of batteries diverted from landfills”.

So as it turns out there are some actual zombies out there, and there is an antidote, so let’s get prepared.

It appears zombies can take on a life of their own so, let’s rise up against the Battery Zombie Apocalypse and dispose of them responsibly so they don’t come back to haunt us!