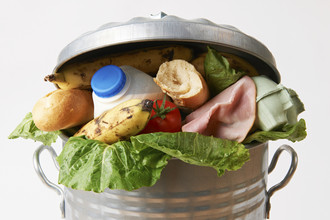 What could you do with $31B? You could relieve world hunger for one year. You could provide clean drinking water to the entire world for three years. Personally, I would build a sanctuary and rescue every dog in the world, but don’t get me started on that or we could be here for hours! (Psst, if you want to chat about dogs hit me up at communications@aquatera.ca)

Or you could just toss it in the trash. Sounds crazy, doesn’t it?

It turns out, Canada is doing just that – tossing $31B worth of food in the trash every single year. On a global scale, we are among the worst contributors of food waste, coming in second to the United States. In Canada, one in eight families struggle to put food on the table while more than 800,000 people visit a food bank every month. With the COVID-19 pandemic hovering over the last seven months, I suspect this number will see a significant rise in 2020.

How Do We Get Here?
While the average consumer is the biggest perpetrator of food waste in Canada, it’s not simply a result of expired food that’s found at the back of your fridge. It’s an all-encompassing issue that starts at the farm and ends at your fork.

Let’s look at one of my favourite foods – the tomato! This delicious fruit goes through a lot before it ends up on our plates. Beginning at the farm, the tomato must pass a rigorous checklist to ensure it hasn’t been exposed to harmful chemicals or pesticides, it isn’t damaged or bruised, and it isn’t an unattractive shape or size. If they are exposed to any of these mishaps, they will likely be tossed right then and there.

Even if they do pass inspection and leave the farm, they are still vulnerable to any number of calamities. Perhaps they are damaged during transport, contaminated when handled, improperly dated and spoiled or show small imperfections. All these instances can result in the tomato being discarded at a restaurant or grocery store.

How Does This Impact Me?
According to the UN Food and Agriculture Organization, “if food waste were its own country, it would have the third largest carbon footprint after the U.S and China”. This is due to resources used in the production, transportation and storage of foods that are never consumed, as well as methane gas emissions produced by decomposing food in landfills.

If you are a farmer in the food industry, you will feel this impact on your bottom line. Farmers are responsible for all costs associated with growing and raising their crops and livestock, but they only get paid if they sell their products. And if they don’t pass the checklist we discussed earlier, you know they are going to be tossed in the trash. For a farmer, it is like throwing out cold hard cash.

As a consumer, these costs are then passed on directly to you. In December of 2018, it was anticipated that food prices would increase between 1.5 per cent and 3.5 per cent. Results showed that consumers were paying an average of 3.5 per cent more on groceries and in restaurants, and 12 per cent more for vegetables, according to Canada's Food Price Report. Not only did this put additional stress on the average consumer, but considerably more strain on those who were already having difficulty putting food on the table, and the food banks that were trying to keep their shelves stocked for those in need.

What Can We Do?
Food waste in undoubtedly a large and complex problem, but with it also comes opportunity. With a spotlight on food waste, it certainly seems to be bringing change to government policies and how the food industry treats it.

In recent years, restaurants have turned to the power of technology to collect, monitor and analyze data. Mobile apps such as Winnow allows commercial kitchens to categorize their inventory, track what is discarded and analyze its value to optimize their kitchens. This helps restaurants save money and encourages a reduction in environmental waste.

Retailers are also changing their attitudes and creating a market for food that would otherwise be discarded. Loblaws is leading the way with their Naturally Imperfect line, which sells imperfect produce at a reduced cost.

And in true fashion, Europe is always ahead of the curve. France has recently taken charge of the food waste problem by forbidding food waste in supermarkets and making it mandatory for retailers to donate excess food.

As a consumer, it is easy to do your part as well. Keep in mind that best before dates are just that – a guide for food quality, not safety. Planning, prepping and refrigerating/freezing your meals for the week ahead can help save money and food waste, as can making small and more frequent trips to the grocer.

Chew on This
There is no reason that a country that throws out $31B worth of food every year should also face the problem of hunger as deeply as Canada does. To our farmers, retailers and consumers, I encourage you to take a stand on food waste in Canada and see what impact you can have on our community.